I’ve been using the free version of Balsamiq Mockups to create some application page mockups.  It’s not quite as fast as pen and paper, but sure as hell beats doing it in something like Visio.  I really like it*.

The application is available both online and in an Adobe Air version that can be downloaded and run from the desktop – I’ve used both and probably will continue to use both, the differences between the two versions are marginal.

Below is a screenshot of a markup I did of mo.notono.us – took all of 10 minutes: 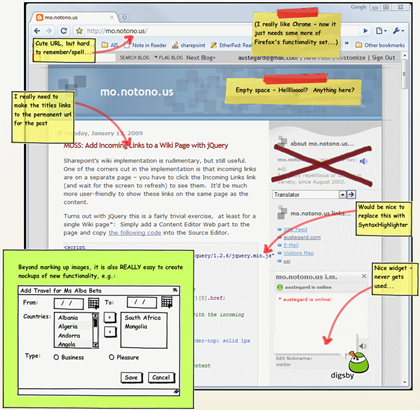 *… in the interest of full disclosure I fully intend to email Mariah to see if I can get myself a free license….