The Danish Google folks have a benchmark suite of JavaScripts that they used for tuning Google Chrome's V8 engine.

Results* are below, higher number is better:

It'll be interesting to see what Firefox 3.1 and TraceMonkey brings to the table, but IE is seriously left in the dust here...  And I doubt Google would be foolish enough to stack these tests in Chrome's favor.

* Each time you run these tests, the score will fluctuate, based on what else is going on on your system.  These are the results of single tests, re-running the test gave different values, but the overall trend is the same.

** After the second Test I got the "Stop running this script?" warning - I clicked No as soon as I could, but not sure if that affected the score on the subsequent tests... 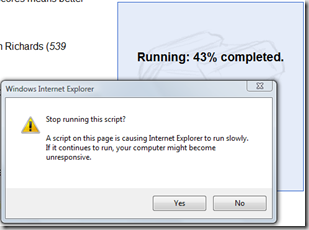