<rant> The Bane of my VPC Existence 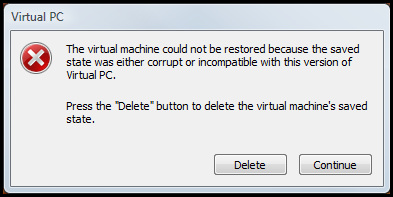 Aaaargh.  Other than simply plugging the plug on my VPC (Action – Close – Turn Off), there just doesn’t seem to be a reliable way to quickly suspend my VPC work:

Since I work on an external drive with a standalone power supply I don’t dare simply suspending my laptop.

Finding that this is an issue that basically has been around since 1998 does not make me any more happy:

Still Some Bumps -- We mentioned in TidBITS-397 that changing the Mac's state, such as swapping a CD-ROM drive for a floppy drive in a PowerBook, could wreak havoc with Virtual PC's "saved state" feature. This is somewhat understandable, since when Virtual PC saves the state of your emulated PC clone for quick launching later, it has to assume that the physical machine will remain the same.

However, Virtual PC could handle these situations more gracefully. The current procedure - informing the user that the saved PC state could not be restored, and then restarting the PC - nearly guarantees the same kind of directory damage and hurt feelings that suddenly restarting a real PC would cause. The software should tell the user what's wrong and either allow an opportunity to set things right before proceeding or cancel the launch and let the user try again later with the proper hardware present, resorting to a restart only as a final option.

TidBITS, Mac News for the rest of us: Virtual PC 2.0: Not Just a Minor Upgrade

Oh – and in case you’re thinking this talks about a different product, no – it’s the same…:

Virtual PC was originally developed by Connectix for the Macintosh and was released in June 1997. In June 2001 the first version of Virtual PC for Windows, version 4.0, was released. Connectix sold versions of Virtual PC bundled with a variety of operating systems, including many versions of Windows, OS/2, and Red Hat Linux. As it became clear that virtualization was important to the enterprise, Microsoft became interested in the sector and acquired Virtual PC and an (at the time) unreleased product called "Virtual Server" from Connectix in February 2003.

I’m oh so happy to see that Connectix/MS did NOTHING to address this in the 8-9 years between v2 and v2007.